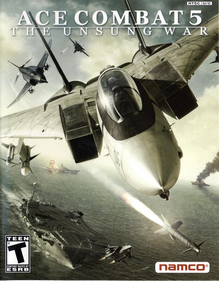 Ace Combat 5: The Unsung War was available to download on PlayStation 4 only to those who pre-ordered Ace Combat 7: Skies Unknown before its release on January 18th, 2019. Namco extended the offer after the game’s release, allowing anyone who bought the game through February 18th to also receive a download code.

UPDATE 07/25/19: We received a tip that purchasing the Deluxe Edition of Ace Combat 7 from the PlayStation Store (at least in European regions) still included a download of Ace Combat 5. This may be temporary and may not extend to other regions. Until this is confirmed by Namco to be a permanent offer, Ace Combat 5 will remain delisted.

According to those who downloaded this version, the game appears to be more than just a copy of the PlayStation 2 original. Enhanced visuals, a much larger file size than the original game, and a save system that does not reference memory cards are some of the noted differences. Given the amount of work, it is possible that Namco may eventually release this version for direct sale.

After attempting to intercept an unidentified aircraft, the entire 108th Tactical Fighter Squadron was destroyed. As the base scrambles its defenses and goes on red alert, you and your fellow elite fighter pilots are called upon to protect your home nation of Osea. Missions in Ace Combat 5 include engaging enemy planes in dogfights, destroying ground targets, and making split-second decisions. With Wingman Command, which lets you issue orders and coordinate group attacks, the fate of an entire squadron is in your hands.