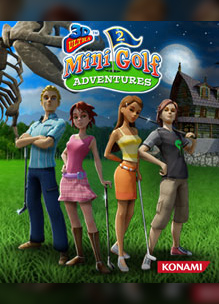 3D Ultra Minigolf Adventures 2 was last confirmed available on Xbox 360 on September 5th, 2012. By February 13th, 2013, TrueAchievements.com had reported that the game was removed from the Xbox Marketplace. The game was likely delisted on PlayStation 3 around the same time.

Wanako Games was folded into Artificial Mind and Movement in 2010 shortly after the game’s release and renamed Behaviour Santiago. This change in branding may have led to the end of publishing terms between Wanako Games and Konami.

Swing back into action with 3D Ultra MiniGolf Adventures 2, jam-packed with more holes, more fun and more minigolf hysteria! Score perfect hole-in-ones as you putt through 54 mind-bending holes in three outrageous themes. Play through the Haunted Manor, Manic Museum, Winter Wonderland or dare to create your own wacky course. Use a variety of silly power-ups to sabotage your opponents as you tee off in 4 player matches. It’s game time as you customize your character with over-the-top accessories including a diving helmet, elf ears, Roman sandals and more!