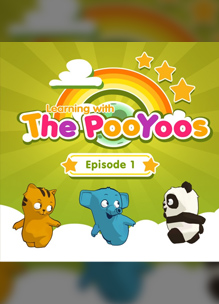 Learning with The PooYoos: Episode 1 was delisted on Nintendo Wii no later than November 2015, according to a GameFAQs board post. The game was delisted due to the liquidation of Lexis Numérique on June 16, 2014. With no entity available to support the game, it was removed from sale. Learning with the PooYoos: Episode 1 was published by Agatsuma Entertainment in Japan, and appears to have remained available on the Wii Shop Channel in that region until its closure on January 30, 2019.

Learning with The PooYoos: Episode 1 & Episode 2 remains available on PlayStation 3 as of April 2022.

Welcome to the first fun braintrainer for children from 3 to 6 years old.

With the PooYoos, a merry band of adorable baby animals, your child will learn the essentials for his or her development: numbers, letters, lateralization, shapes, colours… Your child will get to dance with his or her new friends. With two levels of interactivity, he or she can play regardless of his or her age and level.

This game has been designed for use by children who have not yet grasped reading. Screen text and voice in English, French and Spanish.