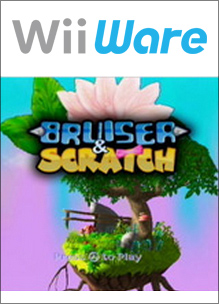 Bruiser & Scratch was delisted on Nintendo Wii no later than August 2011, according to a forum thread on Nintendo Life. The game’s developer, Steel Penny Games, has seemingly gone defunct which is most likely the reason for the game’s delisting. Steel Penny founder and ex-Naughty Dog employee, Jason Hughes, made his distaste with developing for the Wii publicly known in 2013. The experience may have contributed to the decision to pull or otherwise let the game be removed from the Wii Shop Channel.

Our experience with WiiWare showed how little actual desire Nintendo had in supporting a positive and frictionless player experience, as well as in promoting rehashed games on par or above original content on WiiWare that were ostensibly the crown jewel of Nintendo’s networking strategy. Maybe that has changed, but based on the lackluster hardware specs and Nintendo’s traditionally poor online offering, I had not picked them as specifically viable in the next generation of consoles. I would work on their hardware again if it seemed to be a clear winner, but for the time being, we are going to platforms where users are, and looking to make games that are less gimmicky and have the possibility to transcend platforms.

A remade version of this game titled “Puzzling Paws” was released on various PC storefronts beginning on February 21st, 2011, and remains available on Big Fish Games and WildTangent Games as of March 2022.

Test your mental agility with the most challenging and fun puzzles ever! Bruiser and Scratch are stranded in a strange world with a dark secret. Their only hope to find a path home is to unravel the mystery of this place, one over-sized puzzle at a time. Along the way, they make new friends and meet up with old adversaries, each of whom play a role in their journey. Bruiser and Scratch offers a number of tutorial levels to bring the player up to speed gradually. The story unfolds over 48 puzzles and six landscapes. And for players who can’t get enough, Challenge mode offers 75 additional puzzles that range from child’s play to mind-bogglingly difficult.