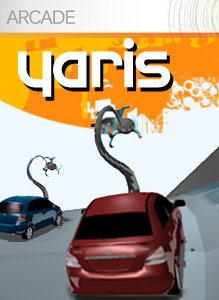 Yaris was delisted on Xbox 360 between October 10th and October 29th, 2008. The delisting was most likely due to an expired licensing deal between Backbone Entertainment and Toyota, or the game’s overwhelmingly negative reception.

Hop into a Toyota Yaris and drive it on crazy tracks loaded with stubborn obstacles, cool powerups, and intense enemy action. The relentlessly twisted courses in Yaris might have loops or even be tube-shaped, but the Yaris never has to worry about sliding off track, as it defies gravity by scaling side-walls and going all topsy-turvy. Equip your Yaris with an arsenal of weapons to take out your adversaries, but be careful to avoid enemy fire, because once your shields are depleted, so is the game.