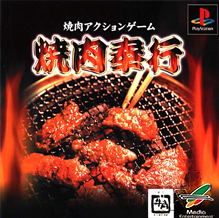 Yakiniku Bugyou was delisted from the US PlayStation Store the week of August 13th, 2012 alongside other MonkeyPaw Games releases: Kyuiin, Arcade Hits: Magical Drop and Magical Drop F. The reason is unclear but MonkeyPaw has stated numerous times on twitter that these games were “delisted by Sony and won’t be coming back” and that the delistings were “permanent” as far as they were concerned.

“Various customers, plucked from the spectrum of society, line up at your restaurant. There’s a fiery redheaded punk rocker, a number of svelte maidens, and a few plain old fat ones. Each of the 15 patrons have different preferences – rare, medium rare, well done. Overcook the meat and face the wrath of a spurned and furious customer. Do it just right and watch as your patron savors every morsel.

The deep puzzler gameplay requires gamers to strategically place numerous pieces of meat on a grill with different heat levels and carefully flip them to culinary perfection as customers await. Up to 12 pieces of food may be thrown on the grill at once but since the foods appear randomly, one must work quickly to make sure that each customer does not wait too long for their order.

Food that is kept too long on the grill will also tend to stick. Graphical stylings include grill lines on meat when they’ve been sufficiently seared and smoke trails that rise as the meat sizzles. The game features voice acting to portray emotions of the many patrons that will certainly come hungry. A two-player competitive mode and survival mode also keep the grilling missions fresh and fiery.”

“You are the aspiring yakiniku master! One of the only cooking games of its kind, barbeque simulation Yakiniku Bugyou puts you in the shoes of a chef who must satisfy both customer’s hunger and patience.”