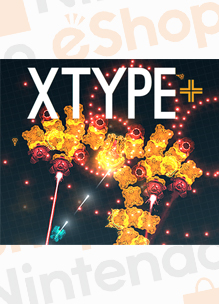 Pure 2D blasting is what retro shooter, XType Plus, has in its gun sights, as it docks for download exclusively in Nintendo eShop on Wii U. You’ll need a sturdy trigger finger to survive this vertical blaster, as you pilot an insignificant vessel against an infinite series of randomly-generated bosses, each more difficult than the last. It’s a simple mission: wipe out the enemy and don’t get hit. The action kicks off with a laidback feel but very soon ramps up to hardcore proportions, where dodging is the key to survival. Lose your three lives, and it’s lights out.

As you battle on, you’ll come under relentless enemy fire from hulking, organic-looking ships. And XType Plus relishes every single shot, as huge patterns of bullets descend on your ship, leaving the slimmest of spaces to squeeze through. One blessing is your tiny hit box – only a direct impact to the core will take you out, although you’ll still need fighter-pilot reflexes and the eyes of a hawk to stay alive.

Beyond the blasting, XType brings fresh content in a supercharged ‘Plus’ mode, exclusive to Wii U, pitting you against the clock, your lives exchanged for a countdown. Add in EMP bombs (electromagnetic pulse) and a larger enemy arsenal, and you’ve got tension on a plate.

Conquer that all-important high score for a badge of honour, then showboat with the best of them via the leaderboard system. Better yet, every high score you upload is accompanied by a video of your game, and other players will be able to watch your performance, good or bad! The upside is that you can also watch how the top ten players reach such lofty heights – they might just help your battle strategy in XType Plus, a lean, pared down and intense challenge for all Wii U shooter fans.