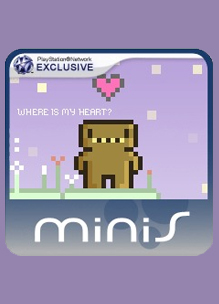 Where is My Heart? was delisted from the PlayStation Store between 2016 and June of 2019. An exact timeframe has yet to be determined but the delisting likely took place closer to 2016. After noticing the game’s disappearance in June of 2019 a Twitter user reached out to developer Die Gute Fabrik. Though a response was delayed and ultimately redirected to Die Gute Fabrik’s Bernie Schulenburg, an explanation was given in May of 2020:

“We had to pull it from PSN because (for tax reasons) I changed company form. And at that point it was selling so little that PlayStation wasn’t interested in updating our contracts.”

For a time, Where is My Heart? was provided to PlayStation Plus members for free. Check your download history to see if you may still have access to it.

Although it is included in the details here, the 2014 PC release of the game is a refined and expanded version of the PlayStation original. It is considered a separate release. The original release is also playable on PlayStation 3 and PlayStation Vita.

“Hidden away in the woods grew a tree. It was old and weighted with sorrow. It hid away three creepy monsters deep down in its heart. It was its secret. Sometimes the monsters wanted to go on a walk. So it had to let them go. They always came back and what belonged together, was then reunited. One day, when the three monsters were on one of their walks, they got terribly lost. What happened on that day is a secret. But let me tell you, it was funny and strange. Sometimes it was even sad and also a little bit scary, all at the same time. Do you want to play Where is my Heart?“