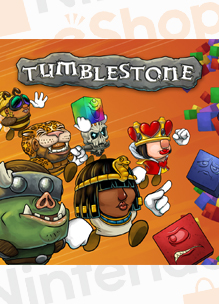 Tumblestone has been delisted from the Nintendo Wii U eShop in North America. At this time the date of delisting is uncertain but may have taken place in October of 2017 near the game’s release on Nintendo Switch. The last Archive.org capture that shows the game was available in North America was from September of 2017.

“Put your puzzle-solving prowess – and your friendships – to the test in Tumblestone, a maddeningly addictive competitive multiplayer game for Nintendo eShop on Wii U.

Tumblestone turns the match-three genre into a deep and cerebral puzzle-solving experience that you won’t forget. The intense action will turn playing “just a few more rounds” with friends into a late night Tumblestone marathon.

Battle against friends and family in frantic multiplayer matches for up to four players*, online** or on the sofa. You can make new friends using Tumblestone’s ranked matchmaking system, then prove that you’re better than them with the online leaderboards! Have an open slot? Play against computer-controlled opponents – but can anyone withstand the punishing Nightmare bot?

As well as the manic multiplayer mayhem, there are a number of single-player game modes, so you can enjoy playing Tumblestone solo. Challenge yourself in the extensive story mode, featuring loads of gameplay modifiers, challenging puzzles and boss battles. Solve progressively more difficult and creative puzzles, help a sausage make friends and find out what happened to the Tumblecrown.

Elsewhere, discover a number of Arcade modes. Kick back and relax with the casual Marathon mode, scratch an intellectual itch with the Infinipuzzle mode, or get your blood pumping with the fast-paced Heartbeat mode.
With hundreds of quests to complete, a range of entertaining game modes and a dozen unique characters and environments, Tumblestone is filled with puzzling fun!“