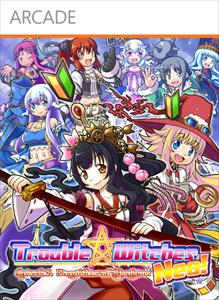 Trouble Witches Neo was delisted between September 8 and October 7th, 2015, when TrueAchievements.com reported that the game had been removed from the Xbox Marketplace. The game was most likely delisted due to an expired licensing agreement between SNK Playmore and Studio SiestA, the IP owners of Trouble Witches.

Discover « TROUBLE WITCHES NEO », horizontal shooting in which cute and comical little witches roam the skies of Xbox LIVE! Sakurako, a traditional Japanese young witch, joins the cast of the Arcade version! The “Story Mode” offers a full voice dubbing in English and in Japanese to enjoy twice the game! The Online Mode featured in “TROUBLE WITCHES NEO” will allow you to play in cooperation with players worldwide, or, at the contrary, to confront them to get the highest score! In addition to the “ARRANGE MODE” with its high quality HD graphics, you can enjoy two different types of “CHALLENGE” and the “ARCADE MODE”, original version of the game, for a very low price ♪