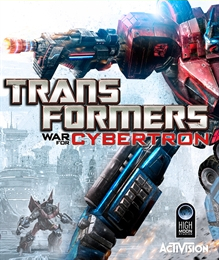 “Transformers: War for Cybertron features two distinct storylines: the AUTOBOT campaign tells a story of heroism to save their home planet against overwhelming odds, and the DECEPTICON campaign tells a story of an unquenchable thirst for power to control the universe. For the first time in a TRANSFORMERS title, fans will be able to play the game with their friends through team-based online co-op, or go head to head in a variety of intense, online multiplayer game modes. The game features a sci-fi art style that introduces fans to the entire living, metallic world of CYBERTRON, as well as all-new visualisations of the iconic TRANSFORMERS characters in their original Cybertronian forms.