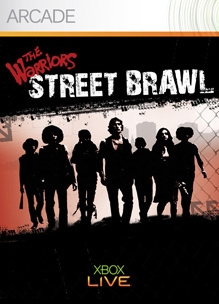 The Warriors: Street Brawl was delisted on Xbox 360 in late September 2013, according to reporting from TrueAchievements.com. Several of Paramount Digital’s other releases from the same era were based on Paramount’s own properties, performed poorly, and were then delisted after only a few years on sale. It would seem The Warriors: Street Brawl was delisted for the same reasons.

A Steam release for Windows and Mac platforms was apparently in the works but appears to have never been completed. A Russian-language PC version of the game has since surfaced on My Abandonware and may be based on what would have been released on Steam.

Wreck enemy gangs with your friends over Xbox LIVE – Survive arena combat in Boss Mode and challenge friends in Versus Mode – Lead The Warriors home to Coney Island for the final showdown with Luther and the Rogues – Vie for the top slot on the leaderboards – Unlock two other Warriors, each with moves of their own – Rock it old school in Arcade Mode – Unleash The Warriors now!