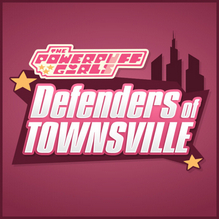 The Powerpuff Girls: Defenders of Townsville was delisted on Steam on March 19th, 2015. It was likely delisted on iOS and Android around this time. Developer Radiangames posted on April 13th, 2015 with the following explanation and reaction:

Many of probably already know that PPG: Defenders of Townsville was removed from Steam, iOS, and Google.  Not because there was a problem with the game, but because Cartoon Network is coming out with a new TV series, and they decided to reduce the visibility of PPG everywhere to reduce confusion (and increase hype?).  I have no idea what art style the new series will be in. PPG: DoT had two different art styles, but it could be a third all-new style.

I’m obviously not happy with this decision, but there’s nothing I can really do about it.  I’ll probably make another Metroidvania-Shooter at some point in the future (with spaceships instead of superhero girls), but I don’t know when that would be.

“Use your arsenal of superpowers to stop Mojo Jojo’s latest scheme in this brand-new Powerpuff Girls adventure shooter! Play as Blossom, Bubbles and Buttercup as you explore the far reaches of Townsville, battling Mojo’s evil robots in a quest to get all your powers back.“

Key Features:
Explore four vast areas in a sprawling “Metroidvania” style adventure.
Play as Blossom, Bubbles and Buttercup, and use each girl’s unique powers to unlock new parts of the map.
Battle tons of evil robots with different behaviors and attack patterns.
Tackle four titanic boss battles.
Find hidden upgrades to empower your heroes and learn new abilities.
Choose the Modern look from the Powerpuff Girls special or the Classic look from the original series.
Mojo’s Key Quest, a “New Game+” mode that lets you replay the game with remixed rooms and all 3 girls powered up.