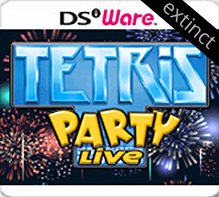 Tetris Party Live was removed from the DSiWare service no later than March 31st, 2012 though the reason is unknown. Tetris Party for WiiWare predates it, comes from the same developer and publisher and remains online to this day. It is possible that the game was delisted in accordance with Electronic Arts’ license to Tetris on mobile platforms that was in place by 2009. It could also be that the game offered a cheaper alternative to the physical DS release at $4.99 and was removed to encourage sales of the pricier version. 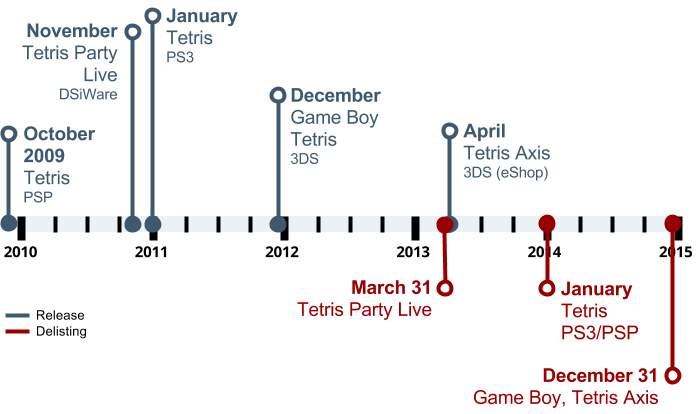 “Play Tetris in real-time with the rest of the world!

Now you can party with Tetris whenever and wherever you want! Tetris Party Live features several exciting game modes from the popular Tetris Party series, including Marathon (a favorite single-player mode), Computer Battle (challenge the computer), VS Battle (challenge a friend), and Duel Space (strategize to claim the most space against a friend). But the party doesn’t stop there! Take the Tetris fun online via Nintendo Wi-Fi Connection, where you can play multiplayer Tetris against up to three opponents at a time. You can also see how your Tetris Party Live skills stack up against the rest of the world using the global ranking system.“