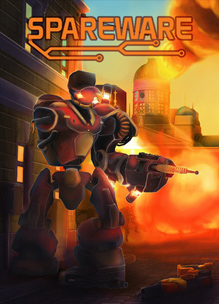 Spareware was delisted on Steam on June 13th, 2020, one day after the release of Rogue Robots, the self-professed sequel to Spareware. The game was likely delisted on Xbox One around this same time. Although initially promised to see free expansions and additions, Rusto apparently decided to reinvent Spareware as a separate title instead. The Steam Store description of Rogue Robots provides the only explanation the studio has given on Spareware:

From the makers of legendary Drunk-Fu and Spareware, we’re here to introduce to you the sequel of Spareware.

But wait. Wasn’t Spareware quite… Quite…

“Extremely simple game with limited mechanics and highly repetitive play.”
“An ok shoot-em-up, no more no less.”
“I quickly found myself becoming bored … the presentation of the game is relatively basic.”

And THAT’S why we changed the whole name of the game.

Mow your way through waves of humans to save mankind from itself in Spareware a 4-player co-op shooter with roguelike elements. Assemble your robot from spare parts and traverse through the cities of the future unlocking new equipment and abilities as you go.