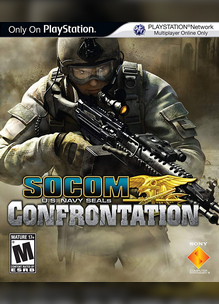 SOCOM: U.S. Navy SEALs Confrontation was shut down on January 28th, 2014 when the multiplayer services for the game ended. Sony announced the deadline regarding MAG, SOCOM Confrontation, and SOCOM 4 in a simple tweet posted on July 16th, 2013:

Advisory: Online multiplayer services for MAG, SOCOM Confrontation, and SOCOM 4 will be ending on 01/28/14

SOCOM: U.S. Navy SEALs Confrontation was likely delisted from the PlayStation Store on or near December 18th, 2013. The game remains available on physical media although it is likely unplayable.

SOCOM: U.S. Navy SEALs Confrontation focuses on online play and the global community and clans that support it. With an emphasis on Tournaments, Clan Ladders, Leader Boards, this is exactly what SOCOM fans have been clamoring for. Delivering a true global-scale experience, players can battle online against the best and brightest from the U.S., Europe and Asia.“