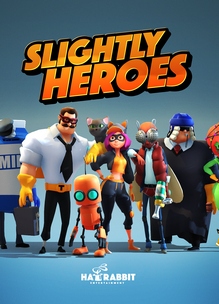 Hatrabbit Entertainment’s titles, Merry Snowballs and Slightly Heroes VR, were delisted from Steam on January 17th, 2020. In September of 2019 the studio announced on their LinkedIn page that they had been acquired by King. The games were likely removed as Hatrabbit ceased to operate as a developer and publisher, or because they didn’t have the time or resources to support their existing titles.

SUIT UP
Step into the role of your imaginary, half-baked superhero in this casual, cross platform shooter. Battle solo, online or versus friends in intense free-movement duels! Slightly Heroes is the newest game from the makers of Merry Snowballs.

BATTLE SOLO OR VERSUS FRIENDS
Experience real-time duels against players from all over the world or invite your friends to join a custom match and battle them across a variety of arenas. You can also battle solo against AI opponents in order to train an improve your skills.

CROSS PLATFORM MULTIPLAYER
Meet opponents from all over the world playing on both PC and Mobile VR. Join the Discord community for better matchmaking.

POWER-UPS
Discover fun power-ups and special weapons that add a creative twist to your attacks and that constantly change the rules of the battles.

COLLECT HEROES AND WEAPONS
Unlock a variety of charming characters and weapons with different attributes and play styles.