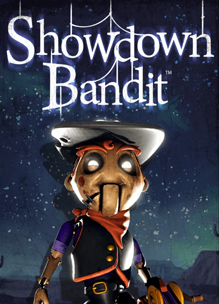 Showdown Bandit was delisted on Steam on June 1st, 2020 during a period where it was temporarily available for free. The delisting appears to be related to developer/publisher Kindly Beast (formerly operating as theMeatly Games) ceasing operations. The company’s homepage was shut down between May and October of 2020 and their social media accounts were deleted or made private. YouTuber Chris Portal published the video ‘The Bendy Controversy, Explained | The Story of Kindly Beast‘ on August 18th, 2020 detailing much of the controversy surrounding Kindly Beast.

Beware! For years kids tuned in to watch the televised puppet world of Showdown Bandit, whose colorful cast performed in front of a live audience of ecstatic children. Then without warning the show was unceremoniously canceled and the studio, props and puppets were left to rot. Yet somehow the show lives again and you’re in the spotlight. Take control of the Bandit himself and explore the dilapidated sets of what was once glorious Showdown Valley in this top-down, stealth-action-horror game from the makers of Bendy.

Try not to lose your wits or your strings as you sneak through the shadowy sets past a menagerie of eerie enemies and helpful inhabitants. Fight ONLY when you must! Don’t be afraid to explore the creepiest, darkest corners as even the smallest clues could help you answer the biggest question of all … who is really pulling the strings?

Thanks to Daniel for submitting this game to the site