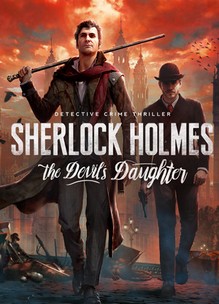 Sherlock Holmes: The Devil’s Daughter was delisted on PlayStation 4 in Australia, Europe, and North America around May 28th, 2021. It was next delisted on PlayStation 4 in Korea between June 7th and 9th, and in Japan on June 10th, 2021. The game remained available briefly on PlayStation Now but was also removed from the roster of titles between June 7th and 9th. The Xbox One releases of the game were presumably delisted around this same late-May to early-June period. Throughout this time the GOG.com, Steam, and Epic Games Store releases appear to have remained available.

The cause for the delistings was due to Frogwares gaining control of the game from Nacon/Bigben Interactive amid the continuing legal battle between the two companies. The game returned to PlayStation 4 on June 24th with Frogwares listed as the publisher. This version is technically a new release and offers a separate Trophy set alongside the now-delisted original. Copyright information on all other releases of the game have been updated to reflect Frogwares as the publisher. Interestingly, the game does not appear to have been delisted on PlayStation 4 in Hong Kong and was instead updated on June 28th to reflect the new publishing information.

As of this writing the game remains delisted worldwide on Xbox One and it is uncertain if it will return in the future.

Sherlock Holmes: The Devil’s Daughter is a fantastic adventure with unique gameplay that blends investigation, action and exploration for an extraordinary experience that will test the limits of your nerves and intelligence. Track down evil in the darkest corners of London and the human soul while playing as the great detective, as you untangle a web of intrigue leading to the final stunning revelation.

Each of your deductions and actions affects the rest of the story, for better or for worse… Play as Sherlock Holmes and use his extraordinary abilities to progress through the adventure. Freely explore several of the city’s neighbourhoods in search of clues and suspects. Interrogations, combat, chases, infiltration… discover a game that is unlike any other!