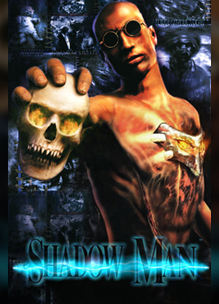 Shadow Man was delisted on GOG.com on April 8th and on Steam on April 16th, 2021 ahead of the release of Shadow Man Remastered for each platform. GOG.com announced that their version of Shadow Man would be delisted ahead of time but no notice was given before the Steam release was taken down.

In addition to returning to GOG.com and Steam, Shadow Man Remastered was also released on the Epic Games Store with all versions featuring “improved AI, physics, and controls, plus never-before-seen content cut from the original game” according to a Eurogamer preview.

He is coming, a possessed man is coming, a voodoo mask in his chest and lines of power in his back. Shadow Man is coming. Going after evil from Liveside to Deadside. To stop the Apocalypse. To save your soul.

Shadow Man is a nonlinear third-person action/adventure game inspired by the Valiant Comics title of the same name. The game encompasses two enormous and varied worlds. Travel through Liveside, the land of the living, as mortal Mike LeRoi, and explore Deadside, the place where lost souls spend an eternity in torment, as his alter ego, the voodoo warrior Shadow Man. Take a ride into the unexplored territories of the human psyche as you try to stop a marauding band of villains from unleashing unspeakable horrors upon the world as we know it.