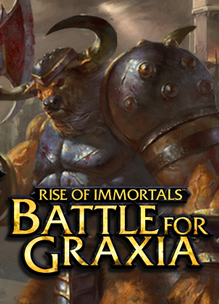 Petroglyph announced on May 31st, 2013 that Rise of Immortals: Battle for Graxia would be shut down later that summer on June 27th. In-game purchases were terminated on the day of the announcement but the free-to-play title remained available until close to the shutdown. Petroglyph’s announcement follows:

Greetings fellow gamers and supporters of Battle for Graxia,

We wish to express to you our gratitude for all of the support, feedback, and encouragement you have given us over the last couple of years on Rise of Immortals and Battle for Graxia (together, “BFG”). It has been an exciting and challenging journey during this time to provide you with a fun and engaging MOBA style of game. We have learned much and it has been a pleasure to work with you, the members of the community.

We have decided to take BFG offline effective June 27, 2013. Effective immediately, we will no longer accept payment for the purchase of Petroglyph coins. As a way of saying thanks to our supporters, anyone that has previously purchased Petroglyph coins in BFG will receive a bonus of Petroglyph coins (in our sole and absolute discretion) in the next 24 hours to spend on anything in the store. Then, at midnight (PST) of June 27, 2013, the BFG servers will be closed down and there will no longer be any access to the game. We reserve the right to bring BFG back online at some time and hope to do so in the future.

For now, please continue to play and have fun with us! We are going to spend the next month participating in matches with all of you and getting ready for our last tournament scheduled for Saturday, June 8th. There will be live videocasts of the event and a number of prizes awarded to the top players. Sometime after the tournament, we will be opening the entire store to everyone with no cost of any kind to our fans.

Once again, we greatly appreciate everyone’s efforts in helping to make this game possible. Please join us until June 27, 2013 in celebration of all the great memories and fun events that made BFG such a great game to be a part of. If you haven’t done so already, register a new account in Petroglyph’s main forums to keep updated on the latest studio announcements. If you have any questions, please reply below or feel free to contact us directly.

Please click the link below to ask any questions you have on the announcement. A reminder that the tournament is still on, so sign up your teams today!

Welcome to Battle for Graxia, a free-to-play Multiplayer Online Battle Arena (or MOBA) that pits teams of players against each other in action-packed, real time strategic combat.

How to Play
Battle for Graxia is a team-based player vs. player (or PvP) online game. Players get into the action by joining the game queue for the scenario of their choice as either a solo player or as a group. To keep games fair and balanced, the matchmaker automatically pairs you with other players of like skill and account level against players of similar skill and power. For those players who want a more casual experience, Battle for Graxia offers the option to create and join Custom games.

With every game that you complete, you earn experience, advancing your account level and unlocking persisted perks like the discipline tree and artifact slots to further customize your game experience.

Free to Play
Battle for Graxia is completely free to download and offers free-to-play content alongside premium options for a minimal fee of either Prestige (earned in-game currency) or Petroglyph Coin (real money transaction) price point.

Petroglyph Coins and Prestige Currency
As the player completes competitive games in Battle for Graxia, they earn Prestige (or in-game) currency that can be spent to unlock immortals, purchase artifacts, and use the Crystal Forge.

For those who don’t want to earn Prestige over time, Battle for Graxia offers Petroglyph Coins for a real money transaction. Petroglyph Coins can be used to purchase immortals, artifacts, and use of the Crystal Forge at a considerably lower rate than the Prestige counter-price. Additionally, Petroglyph Coins are the only currency that can purchase appearance skins for unlocked immortals and consumable perks that increase Prestige Experience and Prestige Coin earnings.