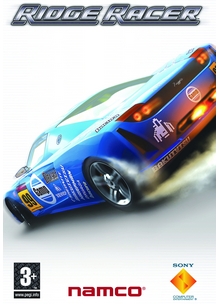 The downloadable version of Ridge Racer (PSP) was delisted from the PlayStation 3 across Europe between the end of 2014 and June of 2017. It was last featured in a PlayStation anniversary sale in December of 2014 and the earliest post we found to confirm its disappearance was in June of 2017. Namco’s PSone releases of Tekken and Tekken 2 were also delisted in this same timeframe.

As of this writing the game remains available to download in Japan (as “The Best” edition) and in North America. The reason for these specific territorial delistings is uncertain but could be due to PlayStation Store licensing or changes in Namco’s standing as a corporation (i.e. the change from Namco Bandai to Bandai NAMCO).

“The latest Ridge Racer™ offers the best of the ten year drift racing dynasty and more! Ridge Racer is poised to dominate another new platform with exciting drift racing gameplay, slick graphics, and a blazing soundtrack.

Featuring nitrous boosting and new modes, Ridge Racer delivers advanced 3D graphics, smooth analog steering, and the largest number of courses in the series – 24 circuits of breakneck speed and exhilaration stand between you and racing glory. Beat the clock in Time Attack Mode or test your racing skills with up to 8 players in Wi-Fi compatible Wireless Battle Mode.

Master the art of drifting and smoke the opposition anytime, anywhere, and in style with Ridge Racer for the PSP® system.“