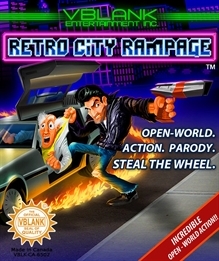 Last call! The original Retro City Rampage will be delisted from the PS Store and replaced with Retro City Rampage: DX in order to avoid customer confusion. While DX includes a mode to play the original RCR, if for some reason you would prefer the pure original, grab it before it’s too late. If you already own the original RCR, you not be affected by this. You will still be able to re-download it indefinitely, at any time. The delisting will only prevent new purchases.

On PC, Nintendo Wii, and Xbox 360 the existing Retro City Rampage received a content update in November of 2014 which added the “DX” content and design. This update replaced the original version of the game on these platforms, however all of the “DX” releases include a mode to play the unmodified original content.

On Xbox 360 the “DX” release of the game was delisted between September 4th, 2016 and February 28th, 2018, possibly being removed after Vblank’s experience with the Xbox platform. The Nintendo Wii release of the game looks to have remained available until the Wii Shop Channel was shut down in January of 2019.

“This 8-bit nostalgic throwback warps open-world carjacking BACK TO THE… ’80s.

Lock and load your light gun!

It’s a retro overload with over 60 story missions and over 40 arcade challenges. ‘Borrow’ vehicles and outrun the law while mowing down your fellow citizens! Jump on pedestrians for coins, or use them for target practice with over 25 weapons and POWER-UPS! WHOA!

Purchasing this content entitles you to both the PS3™ and PS Vita versions!“