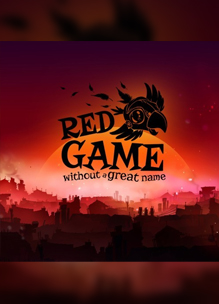 Red Game Without a Great Name was delisted on Steam on July 8th, 2020 and on Nintendo Switch (EU, NA) around this same time. In Europe the game was last on sale at the end of June and in North America it was on sale until July 8th. The game has also been delisted on iOS and Android but it is uncertain if this happened in July of 2020 or earlier.

The cause for the delisting is unclear but could possibly relate in some way to iFun4all’s change in name to Draw Distance which took place in August of 2019. Draw Distance’s homepage does not mention Red Game or older titles released as iFun4all. However, other titles from iFun4all remain available on Nintendo Switch and other platforms as of February 2021. It is possible that Draw Distance is slowly renewing titles released under the iFun4all name and Red Game may return at some point.

Fly, Die, Retry. Don’t be fooled by the game’s crazy title and pretty looks. It’s a challenging 2D arcade game where you play as a mechanical bird traversing a hostile Steampunk world. Prepare to die a lot on barbed wire, spikes, and sawblades. Your only means of survival is your ability to teleport!