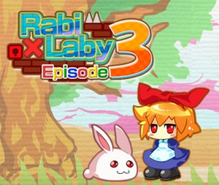 Rabi Laby 3 was delisted from the Nintendo 3DS eShop in North America in May of 2018. According to a Wikipedia discussion started by user Kristie Ann Webb this is when several 3DS titles published by Agetec were removed from the eShop. Many of these titles remain available in Europe as of this writing where they were also published by Agetec.

“Return to the Queen’s labyrinth…

Alice and Rabi were living together in peace once more. But the Queen had something else in mind because she couldn’t forget what they had done. Consumed by resentment and a thirst for revenge, she devised an insidious plan and kidnapped Alice and Rabi, taking them to her labyrinth.

Rabi Laby 3 is the latest episode of this hybrid puzzle-platform series. Alice and Rabi must work together and use their unique skills to escape. As one they must survive many dangers and overcome challenges beyond anything they’ve experienced before. As Alice and Rabi struggle to escape the labyrinth, they’ll discover the Queen’s true intentions and a dark secret will be exposed.

Join Alice and Rabi as they explore the labyrinth. You can also unlock bonus content and earn ranking medals for completed stages.“