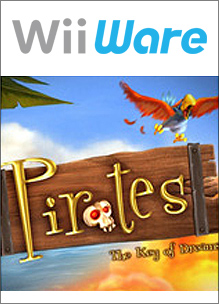 Pirates: The Key of Dreams was delisted on Nintendo Wii no later than November 2015, according to a board post on GameFAQs. Pirates was delisted due to developer Oxygen Games entering administration on October 12, 2009. With no entity available to maintain the game, it was ultimately removed from sale.

Pirates: The Key of Dreams is a frantic nautical shoot-em-up. Sail your way across the Caribbean, cannons blazing, looting booty, running blockades, and ultimately, battling Blackbeard himself.

The player takes control of a Navy Captain sent deep undercover as a ruthless Pirate, in order to seek out and retrieve The Key of Dreams, a valuable and dangerous cursed artifact. Rescue castaways to bolster your ship’s crew, gaining performance increases to your navigation, weaponry, structural integrity and cartography skills. Collect increasingly powerful weaponry including Rockets, Mines, Chain Shot, Saw Blades and a Flamethrower to hurl destruction into the path of your enemies.

Play against three of your scurvy friends or AI opponents in pitched multiplayer battles over 35 levels, in seven themed environments. Choose from different ship types that reflect your play style. Play in turbo mode if you’re Pirate enough!