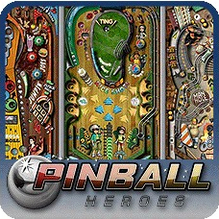 This piecemeal version of Pinball Heroes was only available in North America. Pinball Heroes: Complete, which includes all of the tables, multiplayer, touch controls, and Trophies, remains available in Australia, Europe, and Korea as of June 2018.

“Classic arcade pinball action in the palm of your hands. With multiple Pinball Heroes pinball tables to download – each one based off of a different hit Playstation franchise – you’ll always have a new challenge to conquer. So whether you’re a casual gamer or a true pinball wizard, Pinball Heroes for the PSP gives you authentic arcade pinball experience – anytime and anywhere.“