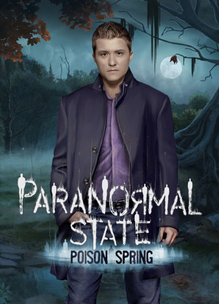 Publisher Legacy Games announced on March 7th, 2022 that Paranormal State: Poison Spring would be leaving Steam at the end of the month with one final sale beginning the week of March 28th. The brief announcement read:

Unfortunately we must bid you a fond farewell. Our rights to distribute Paranormal State: Poison Spring is expiring. Those who already own the game on Steam will still be able to play. And we’re having one final sale starting the week of March 28th before the game goes offline, so here’s your final chance!

Thanks for enjoying the game and solving the mystery over the years!

It appears that Legacy’s publishing deal with developer Teyon expired after nearly a decade. The game was last confirmed to be available on PC from Big Fish Games in June of 2019. Due to the site’s redesign in 2021 it is hard to determine if the game remained available beyond 2019.

Iris Ramirez has called the team of supernatural investigators from A&E’s hit TV show, Paranormal State in a panic! Her job and life are being threatened by dark spirits who have taken over Poison Spring Park, a Civil War battleground and museum.

Join the team of ghost-hunters and try to exorcise the ghosts before it’s too late. Thrills abound as you race to solve a series of terrifying puzzles, investigate chilling hidden object scenes, and put together the pieces of who – or what – is behind it all! Only you can save Iris from the darkness falling upon the Park!

Thanks to Rat Florin for submitting this game to the site