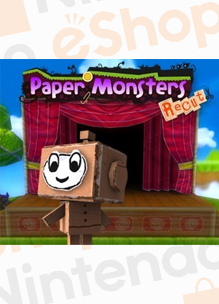 Blocky Bot and Paper Monsters Recut were initially under threat of delisting when Mobot Studios announced their closure on March 6th, 2017. At the same time Crescent Moon Games took over as the publisher for both titles in North America and maintained their availability presumably until some point between 2018 and 2019. This timeframe marks a known period where several independently published releases were being removed from the platform, allegedly because Nintendo of America was no longer renewing their developer/publisher licenses.

Unfortunately, Crescent Moon Games did not take over publishing duties for the European version of Paper Monsters Recut on Wii U and the game was likely delisted across that region later in 2017. Meanwhile, Blocky Bot’s continued existence in Europe is likely due to an oversight and the game could disappear at any time.

The original version of Paper Monsters appears to have been released briefly on Steam between February 3rd and 5th, 2014 before ultimately being replaced by Paper Monsters Recut on October 23rd, 2014.

Dive into the world of Paper Monsters Recut and watch a living world made out of paper, cardboard, and even a few cotton balls unfold right before your eyes. Paper Monsters Recut mixes classic 2D platformer gameplay with gorgeous 3D graphics and brings it to life in a brand new title for Wii U.