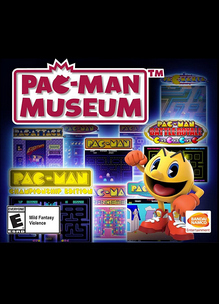 Both Pac-Man Museum and Pac-Man and the Ghostly Adventures were delisted from Steam on July 9th, 2020. The games were likely delisted around this same time on PlayStation 3 and Xbox 360 in North American and Asian territories. Despite celebrating 2020 as the 40th Anniversary of Pac-Man, Namco has unexpectedly decided to remove these titles from sale without warning or explanation. The European and Australian versions were not removed until sometime between September 26, 2020 and July 21, 2021.

As other Pac-Man titles have been delisted in specific territories in the past, it suggests that there was some complication with the way Bandai Namco represented themselves on these releases. For example, in 2014 the company changed team names from Namco Bandai Games and Namco Bandai Studios to become Bandai Namco Games and Bandai Namco Studio, respectively. Then in 2015 the entire company rebranded as Bandai Namco Entertainment.

Lending credence to this theory, in 2016 the Xbox 360 version of Pac-Man Museum was released as a backwards compatible title for Xbox One and was not delisted alongside the older titles until it was removed in May 2022. It is assumed that these name changes are at least partially to blame for the delistings, requiring each release to be updated or to essentially be republished on each platform. Given the titles age, sales, and mediocre reception, Bandai Namco may have simply chosen to remove them from sale.

“Whether it’s your first time playing or you are a PAC-MAN® expert, catch up on your PAC-MAN history! It’s fever time!

PAC-MAN stars in a nostalgia-packed collection of the greatest PAC-MAN games of all time. PAC-MAN MUSEUM™ will include classic PAC-MAN titles as well as newer releases, allowing gamers to play through the evolution of PAC-MAN from his humble beginnings from 1980 through current hits like PAC-MAN Championship Edition and PAC-MAN Battle Royale.“

Thanks to @EduBlake for submitting this game to the site