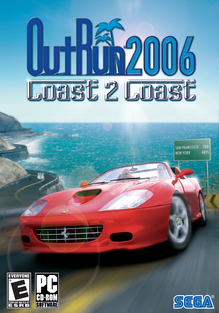 OutRun 2006: Coast 2 Coast was delisted from Steam no later than Autumn 2013. This is based on Steam Community discussions and tweets found in August and October of 2013. Similar to OutRun Online Arcade the game was most likely delisted due to expired licensing from Ferrari whose cars feature heavily in the game.

OutRun 2006: Coast 2 Coast remains available on physical media but its online servers were shut down between 2009 and 2010.

“So much speed, so little time! Experience the superior speed and handling of the latest and Greatest Ferrari cars in OutRun 2006: Coast 2 Coast! Your only doubt is… which one first? Will it be the limited edition Superamerica with a top speed in excess of 200mph or the F430? Choose from 15 elite racers in this arcade favorite. You’ll streak across deserts and blaze through cities and mountains in 30 thrilling stages, including 15 new U.S. locations. With all-new single and multiplayer modes, you will shred tread with six other players utilizing. Ladies and gentlemen, start your engines!“