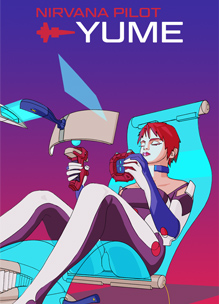 Nirvana Pilot Yume was likely delisted on Xbox One between July and October of 2021. October 22nd is when it was first submitted to the site and October 27th is the last time the game was mentioned on RedDeerGames’ Facebook page. However, the Nirvana Pilot Yume Twitter account continued to mention the Xbox version of the game through the end of 2021. The last review posted to the game’s Xbox.com page was dated June 20th, 2021. No Archive.org captures could be found for the game’s Xbox.com page.

The cause for the delisting is uncertain as other titles from RedDeerGames continue to be sold on Xbox platforms. Developer dev9k publishes the game themselves on Steam where it also remains available. It is possible that the game was delisted due to a technical or compatibility issue and may return in the future.

Nirvana Pilot Yume is the cure for your ‘80s sci-fi anime nostalgia. Turn on the neon lights and raise the volume of the synthwave soundtrack: welcome to 3080.

The barrier of the Speed of Light has been broken, and the Atanasij Power Engines allow spaceships to travel at Ultrathought speed. War is just a memory, and interplanetary disputes are now settled in the G.U.R.U. (Great Ultrathought Race of the Universe), where selected pilots of each Orbital City compete in enormous interplanetary circuits.

A ‚Pilot’ and an ‚Eye’ are required to drive the Ultrathought Spaceships: during the Nirvana Sync, they experience a strong, intimate bond and they can drive the ship as if they were a single organism.

You are the legendary Eye Aldaine, now retired and fallen in disgrace after a tragic accident. Yume is a young and ambitious girl who wants to become a Nirvana Pilot at all costs. Breaking into your life, she asks your help to master the incredible speed of the Ultra-Engine.

Your choices and your piloting skills will define your destiny. Will you be able to win back your place among the best pilots of Alba Proxima?

Thanks to Laurence J. Nguyen for submitting this game to the site