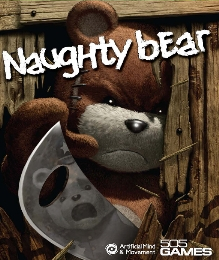 Naughty Bear was delisted from Xbox 360 between May 24th and June 28th, 2015 according to Archive.org captures. It was likely delisted on PlayStation 3 around this same time. The delisting is peculiar as the spin-off title, Naughty Bear: Panic in Paradise, was released in the same year and from the same studios but is still available as of June 2019. It appears that the downloadable versions of the game may have been temporarily removed from sale in 2013 to address bugs.

One possible reason for the delisting could be Artificial Mind & Movement’s rebranding as Behaviour Interactive. Although this happened in 2010 they may have chosen not to relist the original Naughty Bear when its licensing or publishing arrangements with 505 Games expired in 2015.

“When the Bears on Perfection Island throw a party and don’t invite Naughty Bear, the adorable creatures will pay with their lives. Scorned for the last time, Naughty Bear finally seeks to exact his revenge. Scare the stuffing out of your victims as Naughty Bear (a lovable sociopathic teddy bear who unleashes his wrath on the ill-fated bears of Perfection Island) and stab, shoot and bludgeon every cute and fluffy bear that crosses your path.“