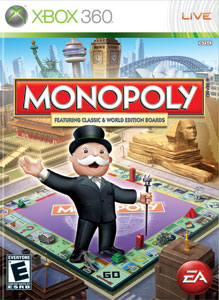 Monopoly was delisted from Xbox Live Games on Demand between November 2nd and December 1st, 2010. Electronic Arts held the Hasbro license from 2007 to 2014 and released several games based on their board games on numerous platforms. Ubisoft announced in August of 2014 that it was the new license holder for Hasbro properties resulting in the delisting of this and most other EA published titles.

Monopoly remains available on physical media for the Nintendo DS, PlayStation 2, PlayStation 3, Xbox 360 and Nintendo Wii where it was released as a standalone product and in the Monopoly Collection with Monopoly Streets.

“MONOPOLY returns in 2008 with a new way to play the classic Hasbro board game. With a host of current-day cities and landmarks from all over the world, this new version will let players wheel and deal and compete to own some of the most recognized locations on Earth.

MONOPOLY is the first console game to launch as a result of the EA/Hasbro alliance. Players can now host the ultimate MONOPOLY party with family and friends to experience classic and global versions of MONOPOLY with digital gameplay.”

• Fill up your passport as you play to unlock new and never-before-seen MONOPOLY boards.