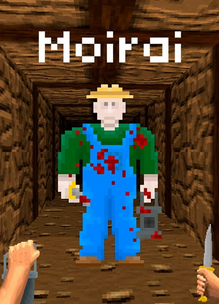 Moirai was initially removed from Game Jolt and IndieDB on June 30th, 2016. Developer and publisher, Chris Johnson, then announced on June 29th, 2017 that Moirai had also been removed from Steam. As a small game that relied on player input served from a personal database, Moirai had come under attack and the small team lacked the resources to compensate. Johnson’s announcement follows and is elaborated upon in this 2017 PC Gamer article:

I thought I’d do a short writeup to say that Moirai will no longer be available to play through. We’ve updated the game build so that it locks players at the title screen.

We’re a small team consisting of an artist, composer and programmer. We all work full time jobs outside of games and have many additional commitments beyond our jobs. We’re not commercial indie game developers making a living off our work. The exciting thing about that is we can work on little experiments like Moirai that are free from commercial constraints.

Moirai started as a small experimental game that we made for the 7DFPS game jam several years ago. It was a passion project that we just had to make because the idea was so compelling. We released the game on several small portals; GameJolt, itch.io and IndieDB in 2013 and then on Steam in 2016.

I think it’s important for us to point out that Moirai has always been a completely free game. It’s a project that we haven’t financially gained from. We are also personally paying regular monthly costs to maintain the game. We do this because it’s important for us that these different experiences exist out in the world.

Since launching on Steam our database has received several attacks. We’ve worked hard (and sometimes with supportive community members) to update our system to a more manageable state and minimise the likelihood of attacks.

However recently our database was under a repeatable attack that ruined the game experience for a few players and resulted in it going offline. It’s important that you know that no email data was compromised in this attack. However this vulnerability means that we are subject to future attacks. We’re not a large studio and we don’t have the resources to properly prevent against these attacks so we’re going to pull the game from the store.

We’d like to thank everyone who has played Moirai and have shared it with their friends. It’s certainly been an interesting adventure for us and we hope it was for you too!

As mentioned in the 2017 PC Gamer article, Johnson did eventually release an offline version of the game specifically for the speedrunning community. This version retains the structure of the original game but is obviously lacking the hook that made Moirai the communal social experiment that it was. For that reason, it is considered Extinct.

The townsfolk tell you that a woman named Julia has gone missing. You venture out into the cave just beyond the village looking for her. You’re given a knife to protect yourself. What you find there may surprise you. Moirai is an experimental, first person game created by Chris Johnson, Brad Barrett and John Oestmann.