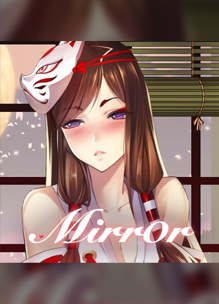 Mirror was delisted on Nintendo Switch on August 31st, 2021 according to price data from Deku Deals. Although the original version of the game on Steam contains nudity and sexual content, this was dramatically changed for the Switch release, allegedly altering some of the characters’ stories entirely. Although toned down, the game still contains busty and scantily clad female characters throughout but the delisting may be due to some alleged performance issues with the game. This was also SakuraGame’s only non-PC release and may have been delisted as they were no longer an operating developer or publisher on Nintendo’s platforms.

Seeing that the Switch release was altered heavily from the Steam original, this version is considered Extinct and only available to existing owners of the Switch game.

This is a game that combines match-3, GALGAME elements and beauties. If you want to learn more about those beauties, you need to win against them first. How the story goes is choice-based, so your choices will ultimately decide their fate.