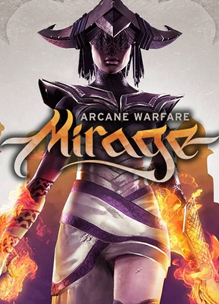 Torn Banner Studios announced on May 23rd, 2018 that Mirage: Arcane Warfare would be removed from sale and its servers shut down by May 31st. Like several games at the time, the decision was based on the then forthcoming General Data Protection Regulation (GDPR) laws that went into effect May 25th, 2018. Torn Banner’s announcement follows:

Mirage: Arcane Warfare will be removed from sale on Steam (and third party marketplaces) within the next week. We have made this change in part due to the new European Union privacy law, the General Data Protection Regulation (GDPR), that comes into effect May 25, 2018. We unfortunately have run out of options for keeping Mirage alive.

Official servers will remain running until May 31. Players will continue to be able to host their own public or private servers after this point. Thank you for your support and for enjoying Mirage’s journey up to now. We look forward to seeing you in our future titles. Our other games, Chivalry: Medieval Warfare and Chivalry: Deadliest Warrior, will not be affected.

On top of the changes required to comply with GDPR regulations, Mirage never found a sustainable audience unlike Chivalry: Medieval Warfare.

Obliterate your enemies with powerful magic or silence them with a sword. Play Mirage: Arcane Warfare, a multiplayer FPS from the creators of Chivalry: Medieval Warfare. Mirage demands time and patience to master with skill-­based, competitive gameplay that feels like a sword fight from 20 feet away. Block any attack – ranged or melee – in bloody combat. Experience the thrill of fantastic battles with an ultra­satisfying, dynamic gore system as limbs fly, blood gushes and heads are dismembered in cathartic, joyful destruction.