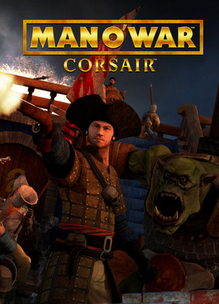 It is with a heavy heart, we must announce the end of Man O’ War: Corsair on the Steam Store. The game is going to be discontinued on the Steam Store due to changes in the the license agreement with Games Workshop.

I for one will still be playing it in my Steam library and it won’t affect anyone who has purchased the game on Steam. The game was released on Early Access in 2016 and as Man O’ War and GW fans it was amazing to work on our own little pocket of Warhammer.

I want to thank the community for their support and hope you are all ok during what is a difficult time. One day soon I hope we can all come together again at gaming events, whether video games or battling on the tabletops!

As of this writing the game remains available on GOG.com with no advanced announcement regarding a delisting, although it is expected to be removed relatively soon. Given that the game was delisted on Steam due to expired licensing from Games Workshop the same should be true for all versions of the game in time.

Engage in epic naval combat and explore the oceans of the Warhammer world.

Your Quest
Sail the seas plundering enemy ships, visiting ports, and trading. Dominate everything in your path with a fleet of ships at your back and watch people flee at the mere sight of you, leaving legends of your deeds in the history books and steel through the hearts of your enemies.

Boarding Actions
As well as sea battles, engaging in boarding actions with enemy vessels sees you walking the deck, weapon in hand, attacking enemy crew. Loot the vessels or sink them, the choice is yours.

Enemies and Allies
Buy a variety of unique and deadly ships. Command allies from different races and fight many deadly enemies. Fierce storms, deadly fleets and terrible foes will block your path to ultimate glory.

Custom Battles
Build your own fleet from any faction in game, and battle it against any foe you choose.

The Old World
A captain in Man O’ War: Corsair can sail the coast of a huge continent in the Warhammer world. Visiting over 50 ports from Erengrad to Sartosa, the sea is yours to explore. A heroic adventurer does not only have enemy ships to contend with. The deep and unexplored oceans hold terrifying creatures that few see and live to tell the tale. These deadly creatures emerging from the deep sea will chill blood and drop jaws in equal measure. The wise would attempt to flee but those brave enough to tackle such creatures will be famed throughout the world. Here there be monsters….