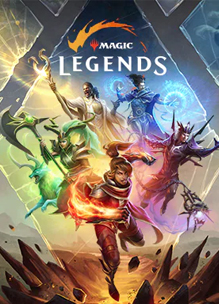 Cryptic Studios’ Steve Ricossa announced on June 29th, 2021 that Magic: Legends on PC would be shutting down on October 31st. Available as an Open Beta on publisher Perfect World’s Arc client and from the Epic Games Store, Magic: Legends was also planned for release on Steam, PlayStation 4, and Xbox One but the announcement confirmed that those versions were now cancelled.

It is with heavy hearts that we announce Magic: Legends will be shutting down on October 31, 2021. All players who spent money in-game across Arc and the Epic Games Store during the Open Beta will be refunded their full purchase amounts. Servers will remain open for play until closing day, however we will be closing the Zen Shop effective immediately. Later this week, all items will instead be purchasable using Aether, our free in-game currency.

Our vision for Magic: Legends missed the mark, but we are proud of what we achieved. Thanks to Wizards of the Coast, we got to bring the expansive Magic: The Gathering Multiverse to a wide audience and explore new angles within the established ARPG genre. We learned several valuable lessons along the way, and we will use them to improve Cryptic’s future development efforts.

Most importantly, we’d like to thank all of the players who explored the Multiverse with us and provided feedback during the Alpha and Beta testing phases. We couldn’t have gotten this far without you!

An additional FAQ was also provided in the post answering specific questions about timing, in-game purchases, refunds, and the potential for future developments in the Magic: Legends universe:

As mentioned, Magic: Legends “missed the mark” and likely didn’t attract enough active or paying players for publisher Perfect World to continue supporting the title even beyond the beta period.

Ancient forces move in the darkness and it’s up to you to walk the planes of the Magic Multiverse to gather the power needed to fight this evil. Choose your path through diverse planes, collect unique spells, Artifacts, and Equipment to create powerful loadouts, and control the chaos of battle as you fight to save the Multiverse from its greatest threat yet.

CONTROL THE CHAOS
Make fast, tactical decisions on the battlefield in real-time combat. Strategically build a deck of spells from your spell library, which will be drawn at random as you fight. Whether you wield the power of White, Blue, Black, Red, or Green mana – your choices determine how you navigate the battlefield.

COLLECT AND UPGRADE
Discover and cast a myriad of spells and collect spell pages to make them more powerful. Acquire and utilize Equipment and Artifacts to synergize with your deck in order to craft your desired playstyle.

FIGHT TOGETHER
Embark on your journey solo or in a group, traversing the planes alone or with up to two other Planeswalkers.