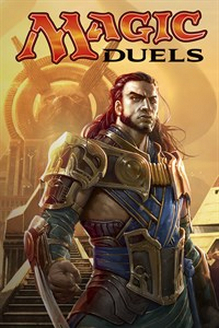 Magic Duels (originally titled Magic Duels: Origins) was delisted from Steam and Xbox One on November 26th, 2019. An announcement was posted earlier the same day:

On Tuesday November 26 we’re removing Magic Duels: Origins from online storefronts and ending continued support for the game. At that time we’re removing the in-game store and all purchasing functions. Players who still have these games will be able to play multiplayer matches and have access to all single player content as well as all available cards. Multiplayer matchmaking will continue as normal.

From all of us, thank you again for your support of these games and the passion you’ve shared.

In 2017, Wizards of the Coast released Magic: The Gathering Arena, developed by their own in-house team. Although initially touted as a complement to Magic Duels it has become its replacement, and its delisting seems to have been designed to usher players from Duels to Arena.

Never played Magic: The Gathering? Learn how as you take on the role of an iconic Planeswalker. Veteran Magic player? Hone your skills and match wits with opponents online.

MANY WAYS TO PLAY: Experience some of Magic’s most iconic moments in Story Mode, head to Battle Mode to take on your friends, or grab a partner for a four-player Two-Headed Giant battle.

BUILD POWERFUL DECKS: Build your deck of devastating spells from an ever-growing library of earnable cards.