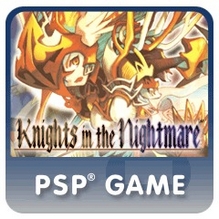 Knights in the Nightmare was delisted from the North American PlayStation Store for PlayStation Portable and Vita no earlier than March 21st, 2019. This is the latest date that a Google Cache archive shows the title available and alongside two other Sting developed RPGs published by Atlus. An anonymous source who submitted the game to the site added the following detail:

“I noticed three PSP games developed by Sting Entertainment and published by Atlus were delisted very recently. I emailed Atlus and got the following response: ‘I can’t get into the details of this, but it was intentional. There is always a chance that the games will return, but if they were taken down for a reason, those chances aren’t very good.'”

Although vague, it does seem to imply that Atlus is behind the delisting and not Sting or even Sony. Like other delisted titles from Atlus, the removal could be due to corporate changes between Atlus, Atlus USA, and/or Sega.

“Somewhere between heaven and the underworld—in the center of a quiet lake—stood an ancient castle known as Aventheim. One night, without warning, denizens of the netherworld emerged and slaughtered the kingdom; nary a soul was left alive. Within an abandoned, long-forgotten church deep in the woods, a wisp is set free. Bereft of memory, it is drawn toward the monster-infested castle and re-awakens the souls of the vanquished knights, leading them back towards the fallen stronghold to confront the very forces of evil that took their lives.“