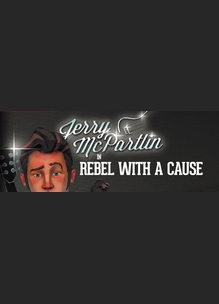 Jerry McPartlin – Rebel with a Cause was delisted from Steam on July 5th, 2016 due to a conflict between developer bluebox and publisher United Independent Entertainment. One of the developers going by the name Xpider75 on Steam commented on the game’s forums in 2017 with some explanation.

It took until April of 2017 for bluebox to attain the distribution rights from UIG but the game couldn’t be brought back to Steam without removing logos and other assets first. During this process bluebox decided to rework the game and it spun into what would become a new standalone release. Although promised for 2018, the game has not returned in any form as of this writing. Bluebox was active on Facebook through most of 2018 sharing new art from the remake but has since gone silent.

“This couldn’t have been everything. Plain, humdrum and ordinary. This is life in Barnett Springs. Jerry has imagined his life completely different. A Rockstar! That is Jerry’s ambition. Leaving Barnett Springs and living the Rock’n’Roll life to the max. Seems like destiny had other plans though.

Since his parents disappearance years ago, nothing is going as planned. A record label’s Big Boss has taken over the city; Jerry’s rival (and former boyhood friend) Jimmy Lash can be heard hootin’ and hollerin’ on every radio; and his relationship with Luna-Lee, owner of the local diner, is going nowhere.

Leaving Barnett Springs and dedicating his life to Rock’n’Roll – that was the plan. And that’s exactly what Jerry has been trying to do. But a cryptic letter and an apocalyptic vision pull Jerry off the road and back to his hometown.

Discover the sinister secret of Barnett Springs, help Jerry solve a series of mysterious murders before a shifty FBI agent jumps to the wrong conclusion, and prove that Rock’n’Roll is anything but the devil’s music. Maybe you can even help Jerry to impress Luna, or at least get the better of Jimmy Lash.“