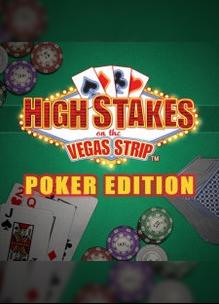 On October 24th, 2017 High Stakes on the Vegas Strip: Poker Edition returned to the PlayStation Store for PlayStation 3 in North America. No announcement was made by Coresoft, the game’s developer and new publisher of the title. The original PlayStation Store page remains online while the newer listing removes all mentions of former publisher Sony Online Entertainment/Daybreak Games and GameSpy which it used for online play.

The updated PlayStation.com page reads similarly to the original (Archive) but with new support for HD resolutions and the promise of two upcoming free downloads that add 10+ games of poker (No-limit Texas Hold’em, Limit Texas Hold’em, Super Hold’em, and more). The game retains online multiplayer which is no longer tied to GameSpy technology. Unexpectedly, Coresoft relisted the game in Australia and Europe complete with a new release date of October 13th, 2020. Coresoft also confirmed on Twitter that the game is playable through PlayStation Now.

High Stakes on the Vegas Strip: Poker Edition was rendered unplayable on May 31st, 2014 with the shutdown of GameSpy’s matchmaking middleware service. The game’s publisher, Sony Online Entertainment (Daybreak Game Company), did not choose to update the game’s online infrastructure. Developer Coresoft turned to Kickstarter to seek funding to maintain its own servers but after just one month the campaign was cancelled.

Previous Game Details (Added in June 2016)
“Push the limits in High Stakes! Challenge players head-on in multiplayer mode – now compatible with the PLAYSTATION®Eye and EyeToy™ USB cameras and may be compatible with other cameras. Download this add-on to play face-to-face with opponents! Play the boards and bluff your way to victory, but don’t let any of your tells slip. Don’t forget to download the first two add-ons to play all 10 poker styles.”

Other Poker Features Include: