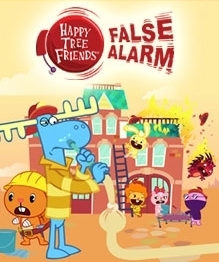 Happy Tree Friends: False Alarm returned to the Xbox 360 Marketplace no later than January 9th, 2019 according to a submission made to the site. No publisher or developer information has changed on the page and the Steam version has not returned as of this writing. The reason for the game’s return only on Xbox 360 is unknown. Our original post follows.

“Based on the popular and twisted Web series, Lumpy and his accident-prone friends face one gory, horrible disaster after another in Happy Tree Friends False Alarm™! Armed with a helicopter pack, Lumpy rescues his pals by blasting open areas where they may be trapped with flaming napalm or explosive nitro, or he can put them into a deep freeze if they are about to stumble into danger. Try to keep the friends from peril in ten exclusive disaster-filled scenarios, each with three frantic levels, and brand new cutscenes.

Xbox LIVE® Arcade features: Use the leaderboards to compete with friends, track your progress as you advance through Story mode, and earn new Achievements.