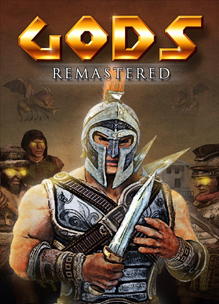 Developer and publisher Robot Riot first announced on January 30th, 2022 that GODS Remastered would be removed from sale on all marketplaces on March 27th. A follow-up post on the game’s Facebook page was posted the morning of February 1st, 2022 with slightly different wording, stating that their licensing period had expired.

Dear players! Due to licensing restrictions the distribution of GODS Remastered will end on Mar 27, 2022. Everyone who has bought or will buy the game until this date will continue to be able to download and play it after that date, it just won’t be available to new customers. Please watch out for heavy discounts of this game on all platforms during the final sales period!


The end of the licensing period makes this step necessary, however, people who own the game already won’t be affected and will still be able to download and play the game beyond the distribution end date.

If you don’t own the game yet, NOW IS THE TIME! Follow the button above to get your heavily discounted copy today!

Finally, I would like to thank everyone here for your support and interest in the game! If you’re here because you like old Amiga games, you might want to have a look at a new game we’re currently working on, which will be a Run&Gun in the spirit of classics like the Turrican series or Gunlord. Please visit https://facebook.com/Protonites

According to the game’s homepage the work was officially licensed by The Bitmap Brothers owner Mike Montgomery who also supported the development, making its short-lived availability a surprise. The delisting possibly relates to the game’s opening theme, a remix of ‘Into the Wonderful‘ by John Foxx and Nation 12 who created the song for the original game and continues to own the rights to it. However, it is unclear if the game’s remixed theme was licensed for this release.

As of early April 2022 the game still appeared on Nintendo.com but was unavailable to be purchased directly from a Nintendo Switch in both North America and Europe.

Join the nameless warrior on a dangerous journey through four worlds to defeat the Great Guardians who have stolen the homes of the gods. As a reward you will receive immortality and a place in the eternal hall of fame…

Experience the 2D-action classic Gods by the legendary Bitmap Brothers in a new look! Exciting levels full of monsters and puzzles await you, which you can play either in the original pixel graphics or in a modern 3D mode with an extensive new soundtrack.