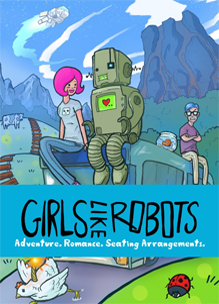 Four releases from publisher Unity Games Japan — Ballpoint Universe: Infinite, Girls Like Robots, Nihilumbra, Stick it to The Man!, and Teslagrad — were delisted from the Nintendo Wii U eShop in Japan on December 28th, 2016.

The game was later delisted from the Nintendo Wii U eShop in North America, presumably between 2018 and 2019. This timeframe marks a period where several independently published releases were being removed from the platform, allegedly because Nintendo was no longer renewing their developer/publisher licenses.

“Their faces are the playing pieces. The rules are their emotions! Ridiculously charming puzzles, wrapped around an epic tale of love and danger, topped off with an authentic old-time stringband soundtrack! The goal is to put every one next to their friends.

But you can’t please everybody all the time. Sometimes you gotta break hearts to save the day. And the day definitely needs saving: Volcanoes, exploding chickens, planetary invasion and a boy who just wants to dance with a girl.“