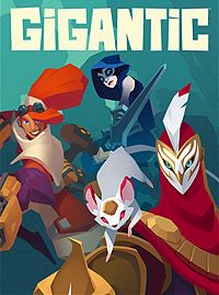 Alongside its final content update on January 31st, 2018, Perfect World and developer Motiga announced that Gigantic would be shutting down on July 31st, 2018. Cash purchases for in-game Rubies were also disabled at this time, all prices for Hero characters were set to 0.00, and Shop items were reduced in price. The announcement read:

“It is with heavy hearts that we announce the January Update is the final content update for Gigantic, and the game servers will be discontinued on July 31, 2018. The journey over these last few years was met with outstanding support from our players and we are all very proud of the incredible experience Gigantic is today. The team wants to give a big shout out to our awesome community – both those who have been with us since the beginning as well as those who just picked up the game recently. We want to extend our sincere gratitude to everyone who gave Gigantic a chance.

For all the amazing folks who continue to play and show passion for Gigantic, all Heroes will be FREE as the purchasing of Rubies and Hero Packs have been disabled. This includes our newest hero, T-Mat! Currency will still be rewarded in-game, and any Crowns or Rubies gained by an account will remain available to purchase Shop items at discounted prices. You can read more in our January Update Notes.

Discontinuing Gigantic was not an easy decision. The game is a unique and exciting experience that captured many hearts and minds. Unfortunately, it did not resonate with as many players as we’d hoped. Over the last several months, the teams at Motiga and Perfect World looked into viable options to sustain Gigantic. However, the current state of the game has restricted options for further progress and relevant content updates, and delivering basic features while also fixing long-standing issues was more complicated than expected. Despite our best efforts, we were unable to find an impactful solution that would help Gigantic break through in a crowded market.

Gigantic remains a labor of love to the Motiga and Perfect World teams who worked on the game. It pains us to let it go, and we cannot thank everyone enough who saw something special in Gigantic and its vision. We hope you continue to enjoy Gigantic until July 31st while the official servers remain online.

One last GIGANTIC thank you to our amazing community, and while the sails are up, we’ll see you on the airship!”

Rumblings about the game’s demise stretched back to November 2017 when Perfect World announced that it had laid off most of the team behind the game. In a statement at the time the company revealed that “a core team of developers remains […] who will work with us to support the game and its players”.

Looking at the SteamDB charts, Gigantic made a decent start with thousands of daily players on Steam but by August 2017 the numbers had fallen sharply. Player counts plateaued briefly in Autumn 2017 but began falling thereafter, dropping below 200 daily players from November 2017.

Gigantic is a fast and fluid Strategic Hero Shooter, where you battle against and alongside massive Guardians, in deeply strategic team gameplay. Think fast, be bold, Go Gigantic!

A MOBA, a third person shooter, an unforgettable experience of hardcore five-on-five PvP action for skilled gamers. Play the beta first on Xbox One and Windows 10.

Power Up!
Summon, upgrade and protect your creatures to control the map and gather power!

Go Gigantic!
Defeat your enemies, control the map and power up to unleash your Guardian in an epic clash of GIGANTIC proportions!

Xbox One Game Preview: This game is a work in progress. It may or may not change over time or release as a final product. Purchase only if you are comfortable with the current state of the unfinished game.