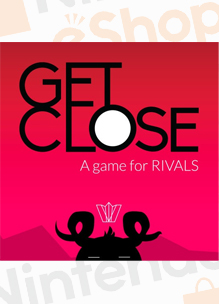 GetClose is a local multiplayer game for 2 or 4 players that forces you to share a Wii U GamePad and Pro Controller for competitive arcade action. Players take control of a single Star Kid who must capture the Cosmic Crown to become victorious.

Collect pickups to obtain special weapons that can cripple your opponents or provide you with the advantage to get that last score.

Play against each other in 12 uniquely designed maps that include deadly lasers, spiky turnstiles and obtrusive speed traps.

Collect pizza slices, Chinese take-out and cherries to unlock stamps for Miiverse. GetClose is a fun, fast paced game for those who love local multiplayer games.

So gather your friends, family members and maybe that really smart dog you know down the street, its time to GetClose.