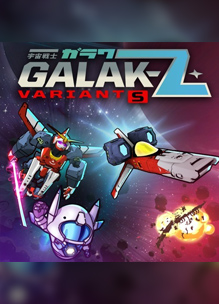 The team at 17-Bit announced on December 15th, 2020 that GALAK-Z: Variant S for the Nintendo Switch would be shut down on January 31st, 2021. As a free-to-play game requiring a network connection, the game became inaccessible as of this date. Previously, the iOS and Android versions of the game were shut down and removed from sale on March 1st, 2020.

After an exciting voyage exploring the farthest reaches of the universe and making new friends, GALAK-Z: Variant S will be closing on 1/31/21 11:59 UTC. Thank you for joining us! We look forward to seeing you in-game Bot Battling and clearing missions over the next several weeks.

The game was likely shut down due to a decreased number of active players willing to make in-game purchases or possibly at the end of the original publishing arrangements between 17-Bit and GungHo.

GALAK-Z: Variant S is a brand new, one-of-a-kind, space-shooting action-RPG that is specially crafted to take advantage of all of the unique features of the Nintendo Switch™.

Experience stunning space combat from the cockpit of a sleek spaceship or a giant Mech! Battle space pirates, squish giant bugs, challenge Dark Bot bosses, and crush the evil Baron’s army of nasty Imperial troops through more than a hundred endlessly replayable missions in a full-scale story campaign. Fight against player-created squads in the Bot Battle League and earn Trophies to reap better rewards. Collect upgrades, salvage, relics, and Bots to make your spaceship and Mech even stronger, and fight to become the highest ranked pilot in the galaxy!

●  Shoot! Blast enemies away with your spaceship’s rapid-fire laser cannon

●  Slice! Carve up foes with your Mech’s radical laser sword

●  Collect! Create squads of friendly Bots to battle against other players and earn special rewards

Thanks to Chariblaze for submitting this game to the site