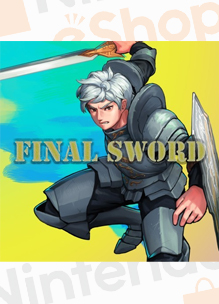 Final Sword was delisted from the Nintendo Switch on July 6th, 2020. It was first delisted in Japan but by the morning of July 7th it had been removed from sale in Europe and North American territories. As reported by both Japanese Nintendo and Nintendo Life, the game plagiarized at least one musical theme from The Legend of Zelda series. As of this writing the original “MobileEdition” version of the game remains available for iOS and Android devices.

On January 20, 2022 the game was re-released on Nintendo Switch under the name Final Sword Definitive Edition, with the plagiarized theme reportedly being removed and replaced. For the purposes of our site, the original release of Final Sword will still be considered delisted.

“The original Action RPG of Nintendo Switch™ in 2020.Enjoy the powerful battles on the open world. The source of evil, it has brought numerous monster corps. Defeat the source of evil by acquiring various skills and magics through the adventure. You will experience breathtaking battles with real fantasy monsters.“

Thanks to Justin Baileyfor submitting this game to the site